A dear old friend has asked me for years for one of my wide boards. He knew the story of my lumber. That is was all cut before 1934 in the region of our mountains that was to become  the Great Smoky Mountain National Park. This lumber was cut sometime between 1930-1934 by the Little River Lumber Company. Bob Emmitt whom I studied with was privately employed by James Van Derventer to build furniture for him. They knew the park was coming in and that would be the last of the timber to come out of the region. So Bob  Emmitt and a helper were sent up to Townsend, Tennessee to buy the lumber they needed from the Little River Lumber Company. Bob said there were stacks of lumber three stories high and he would just stand there studying the ends of the board. By studying the ends he could tell which boards came from the same tree. He wanted the lumber to match in color and grain. But two boards caught his eye. They were cherry from the same tree and 39 1/2″ wide without the heart of the tree in either board. Bob later used part of one board to make a Chippendale Pie Crust Table. About seven years after Bob’s death I was able to by the lumber form Bob’s widow Peggy Emmitt.

After leveling about a third with hand planes I started using a router and a 1 1/2″ bit to make a row of cut 1/16″ deep. Then I would remove every other one out with the router.

The scrub plane is used to remove the ridges that were left. Notice the axe notch in the lower right corner of the board.

A straight edge and #6 and#7 bench planes are used to level the top again before another pass with the router.

A pair of winding sticks are used to check for any twist it the top. 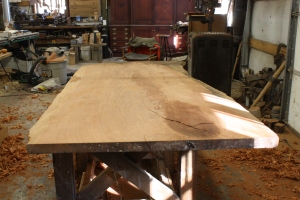 One more pass with the router and leveling then it will be ready for finish planing. The final surface will be from the #3 and #4 1/2 bench planes. I can produce a finer surface quicker with the hand planes than can be obtained by sanding.

© Buddy Floyd and furniturewithhistory.com, 2011 - 2012. Unauthorized use and/or duplication of this material without express and written permission from this blog’s author and/or owner is strictly prohibited. Excerpts and links may be used, provided that full and clear credit is given to Buddy Floyd and furniturewithhistory.com with appropriate and specific direction to the original content.
%d bloggers like this: