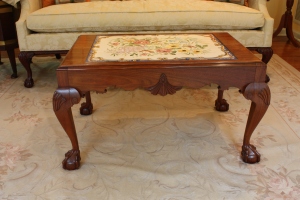 This is a coffee table made out of walnut that I did for some clients. The clients had found the tiles for the top while in Europe. They contacted me to design a table for the tiles. Their sofa has ball and claw feet and this table was to go in front of it so I suggested we carry that into the coffee table.

This is a close up of the leg. It takes me eight hours to carve a ball and claw foot , for the foot alone. The total time in this table was 120 hours. 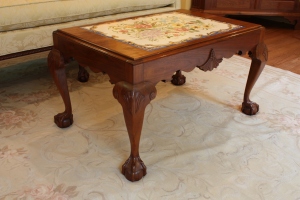 I scrolled the apron to match the c-scrolls in the pattern of the tiles.

Sat. Feb. 25 ,20012 from 1pm to 5 pm I’ll be doing a router workshop. The router is a work horse in the shop. It will be more demonstration but will include some hands on. The workshop will cover router safety, router tables, jigs & fixtures, raised panels, doors, dovetails, molding, pattern work, and free hand router use.
The class will be limited to 8 people. Each person needs to bring safety glasses and hearing protection. Cost will be $75.00 per student.

Old houses are just big pieces of furniture. In 2004 I took down Caldwell Springs. This house was built between 1812 and 1815 in east Knox Co.. It is in a Tidewater style of timber framing.The wall were noggin infilled. This is the back side of the house with the clapboard removed. There is a later addition in the left of the photo. I did not bother with the addition. I was given 14 days to take it down or it would have been bulldozed down and burned. It took me 16 days to take it down. The fellow was very kind to give me two more days.

The house was built out of Southern Heart Pine.I have the frame, flooring, joist, rafters, clapboard, door and window frames, and stair case. There is app. 2,500 board feet of lumber in the materials. All nails were pulled. I did not get the doors, windows, moldings, mantels, or ceilings boards.  The house has been stored in Knoxville. It has been put on sticks and covered with tin off the ground. $3,000.00 ( SOLD)

The best store in the area for all your woodworking needs as well as power tools,hand tools, finishing supplies, hardware, and hard woods.

I recently had a class on Handsaw Sharpening, and hope to do more in the future. See their site at Woodcraft of Johnson City

The Shoppe at 350 Market

If you ever towards Clinton, TN, it’s a short drive to The Shoppe at 350 Market. Worth the trip, Sandy has a collection of Antiques, and Fine Art and garden accessories. Please check out his shop at, you guessed it , 350 Market street in downtown Clinton TN.

The Shoppe at 350 Market

Please take a look at her wonderful work at Cornerstone Creations, LLC in Charleston, SC. As well her blog “Wood Carving Journeys” for all her current projects.

Posted by furniturewithhistory  |  January 22, 2012 | Categories: Uncategorized | Comments Off on Mary May – Woodcarver

The sideboard has a new top.

The new top has been put on the base.

Close up of the  new top.

I want to start sharing the number of hours that it takes to complete a project.  On this top to veneer it up, start to finish,  was 57 hours. I hope this will help others to make better estimates on similar work.  I may go back to older post and give the hours on the work.

Posted by furniturewithhistory  |  January 16, 2012 | Categories: Veneer Work | Comments Off on The sideboard has a new top.

Out of the veneer press

The top came out of the veneer press perfect.  The vacuum press does a wonderful job by applying an even pressure of 1200 lbs.  per square foot .

Posted by furniturewithhistory  |  January 16, 2012 | Categories: Veneer Work | Comments Off on Out of the veneer press

New top being taped up

After doing a full size layout I made four different templates to cut out the pattern. I use blue painters tape to hold the parts together. All the veneer was sized before cutting. This makes the veneer more flexible when handling and cutting. 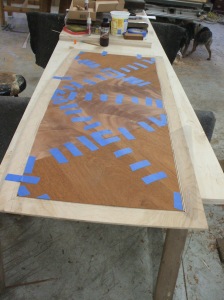 After the main pattern of the top was taped I added the inlay. 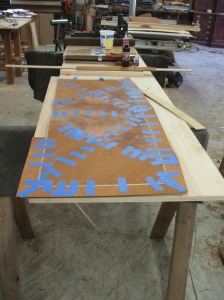 The last step was to add the cross banding to the top.  Then it went into a vacuum bag to be pressed until the glue sets.  I use a two part resin glue for gluing.

© Buddy Floyd and furniturewithhistory.com, 2011 - 2012. Unauthorized use and/or duplication of this material without express and written permission from this blog’s author and/or owner is strictly prohibited. Excerpts and links may be used, provided that full and clear credit is given to Buddy Floyd and furniturewithhistory.com with appropriate and specific direction to the original content.
Loading Comments...